Dawnstar is one of the major cities located in Skyrim. It is the capital of The Pale, and serves as a garrison village along the northern coast of Skyrim. Governed by Jarl Skald the Elder, it is a small village, consisting of two rival mines, a small dock and a small number of residents. Dawnstar is one of the colder settlements in Skyrim; along with Winterhold and Windhelm, it resides in perpetual snow and ice.

Dawnstar review: Dawnstar is a fishing village on the northern coast of Skyrim. While it may not the most interesting village in the 9 Holds, Dawnstar provides a few opportunities to earn some Septims. There are two mines in the village: the Iron-Breaker Mine and the Quicksilver Mine, both of which should be considered if one needs a few Septims to buy supplies. Another point of the interest in the village is The Mortar and Pestle, an alchemy merchant that sells plenty of ingredients for the budding alchemist. And finally we have the tavern, The Windpeak Inn caters to many an adventurers needs. Food and wine are offered, as well as a relatively comfortable bed. Alas, Dawnstar is a simple village at most, not very close to the main roads, but it is a good place to rest and resupply if you happen to stumble upon it in a storm. 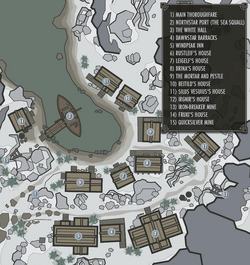 It was after the destruction of a fortress in Dawnstar during 2E 283 that Potentate Versidue-Shaie declared martial law, leading to one of the most brutal and bloody periods in the history of Tamriel.[1] [2] This also led to the creation of the Fighters Guild, Mages Guild, and Thieves Guild during the Guilds Act. [3][4]

The village was rebuilt at least before the end of the Third Era[5]. However, it is noted in the Pocket Guide to the Empire, Third Edition: Skyrim that Macella was the Queen of Dawnstar, and had married King Thian of Solitude.
Points of interest

The Mortar and Pestle

Nearby points of interest

Traveling to Dawnstar when a member of the Companions is a follower may cause them to flee inexplicably from a random battle with a dragon.
Merchant’s chest

To the left of the Dawnstar Mine, there are some trees and a couple of rocks. Crouch and search around the rocks and the option to search an invisible chest appears. The chest contains the contents of a Khajiiti merchant named Ahkari, denoted by the presence of Moon Sugar and Skooma (cargo appropriate for an Elsweyr smuggler) within the chest. It is possible to take all the items without any consequences. To make the contents in respawn, face Ahkari within interaction distance, wait 48 hours then ask what she has for sale.

There is a chance that each time talking to Ahkari about what she has for sale will have some items in the chest change randomly, making each visit to the chest a little different.