It may help you a lot in your playing

As we have referred to it before, touching the background of the game is useful to boost your level. Thus to help you achieve the goal in The Elder Scrolls Online, we will talk about the history of the game in the moment. 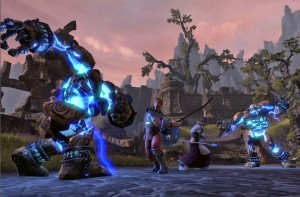 Arena was never meant to be the role play games that it turned out to be. In the development of the game Arena, the side quests and role play games element gradually became more important than the original idea of you being a gladiator where your gladiator team travel the land of Tamriel fighting other gladiator teams in major cities.

Despite this fact the games had a decent following. The games also had the problem of monotony due to the games random generation from a limited array of designs. Seeing these mistakes Todd Howard, the new project leader after Julian LeFay, decided to pay more attention to detail and making each town/dungeon different, while improving on the previously clunky mechanics; and other various problems with the previous Elder Scrolls games.

In the early times, Elder Scrolls were not its most popular. In Arena and Daggerfall many people gave the games bad reviews. Upon release they both had multiple bugs, which were addressed in released patches, coupled with the unforgiving nature of the game and the pure size of the worlds, led many gamers to not recommend the game to others.