The cover story of Game Informer’s June issue provides a first look at ZeniMax Online Studios’ The Elder Scrolls Online, revealing plenty of details about the anticipated project. Set 1000 years before the events of The Elder Scrolls V: Skyrim, The Elder Scrolls Online will span most of the continent of Tamriel, which includes more famous provinces like Skyrim, Cyrodiil and Morrowind. You’ll be able to take on standard quests, dive into public dungeons and compete in an open players-versus-player combat system at the level cap for control of the Emperor’s throne in Cyrodiil.

Starting off, you’ll choose to play as one of three factions, each comprised of three of The Elder Scrolls’ species. The Nords, Dark Elves and Argonians form the Ebonheart Pact, the High Elves, Wood Elves and Khajiit are bound together as the Aldmeri Dominion, and The Daggerfall Covenant includes the Bretons, Redguard and Orcs. Each faction will have unique questing content, so if you decide to replay as a different faction, you won’t have to complete the exact same set of tasks all over again.

The game will be class-based, so you can’t just jump in and start developing your character however you want like you can in Skyrim. ZeniMax Online isn’t revealing the exact classes yet, but from the sounds of things there’ll be a rogue-type class, a healer, a damage-focused caster, an archer and a fighter, all of which fit to some degree into the traditional healer / tank / damage-per-second categories of traditional MMOs, but ZeniMax Online stresses that though healing is a big part of the game, you won’t necessarily need a dedicated healer to clear all group content.

Outside of combat you’ll be able to tweak your skill bar, which determines your available abilities. Two of the skill slots will change depending on your equipped weapon, you can add in a few class-specific skills, and the final skill slot is an ultimate. Triggering your ultimate requires a certain reserve of finesse, which builds as you accomplish special tasks in battle. By working together with friendly players you can create skill combos, where a mage class can light an oil slick laid down by a rogue class on fire, or a fighter class can apparently spin kick fireballs from within a carpet of flame laid down by a mage. You can also perform special actions like interrupting casted spells or using shields, two-handed weapons or magic to block incoming attacks to build finesse, encouraging you to take advantage of advanced combat actions whenever possible.

For questing, ZeniMax Online will make use of phasing like in Blizzard’s World of Warcraft, where the world around you will change after completing certain quest objectives. There’ll be plenty to explore across Tamriel, encouraging you to search without specific quest goals and discover hidden caves and rewards. That being said, there’ll still be plenty of structured content, including instanced dungeons as well as public dungeons, which will feature similar content but can be accessed by anyone. 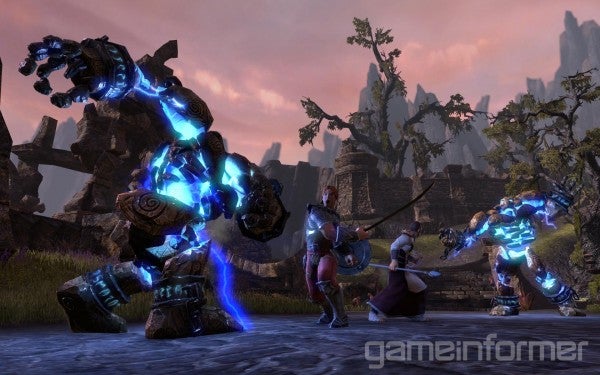 For end game content you’ll get heroic versions of instanced dungeons, raids, as well as an open world player versus player combat system. The three factions will fight for control of terrain surrounding the Imperial City in Cyrodiil. Across the province will be capturable forts, castles and farms, and you can either charge to the front lines of battle or hang back and fire siege weaponry to bust up the walls of some of the more heavily fortified capture points. Once your faction is into the Imperial City, you’ll find the streets will be full of enemies, and once the roads are cleared a new emperor will be crowed based on which player contributed most to the war effort. Your faction’s success in Cyrodiil’s PvP areas will confer faction-wide bonuses, but being crowned emperor will simply be for personal pride, and will not reward some god-like temporary power or items.

The familiar guilds of The Elder Scrolls, including the Dark Brotherhood, Fighters Guild, Thieves Guild and Mages Guild, will all be in the game, but ZeniMax Online isn’t talking about all of them quite yet. At least for the Fighters and Mages Guilds you’ll be able to perform tasks in the world to boost reputation and eventually unlock rewards in the form of abilities. As you quest and level you’ll be able to craft items and acquire mounts, but you won’t be able to own property. ZeniMax Online also mentioned that while werewolves and vampires are in the game, you can’t actually transform into either of those creatures.

While Bethesda Game Studios, the developer of the single-player Elder Scrolls games, is not creating The Elder Scrolls Online, they are consulting on aspects such as lore accuracy. Aside from that, though, all decisions about content creation are being handled within ZeniMax Online Studios.