MMO leaders continue to attract the public with more content

The Elder Scrolls Online had one of its best years during the past 2017, moment in which it managed to surpass the incredible number of 10 million players thanks to the content that is added of regular form to the work so much in the form of small DLCs as of great expansions that include even entire continents, as is the case with Morrowind. But from ZeniMax Online and Bethesda do not want to stay here and, as confirmed a while ago, in 2018 there is still more and better content for this popular MMORPG. 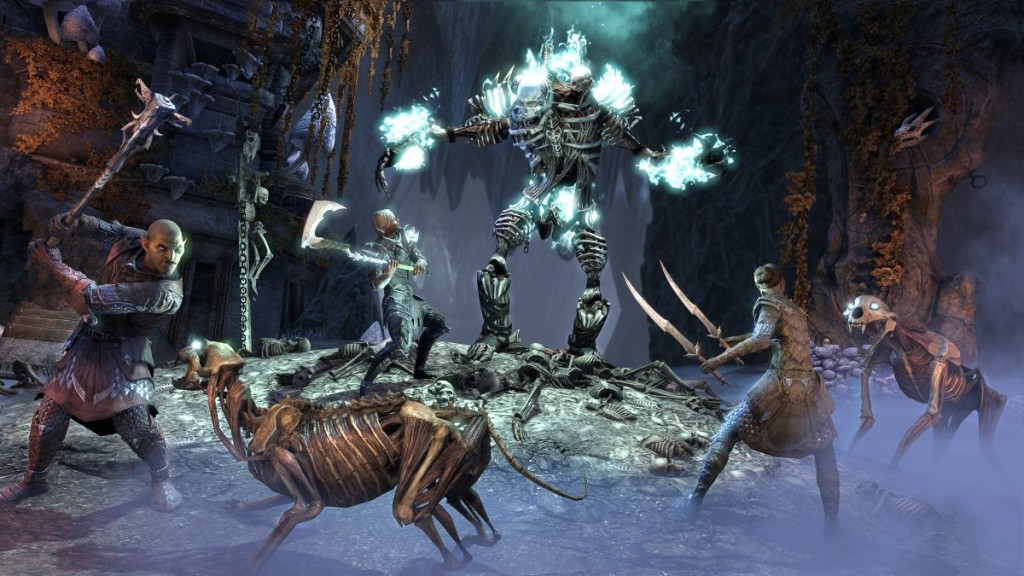 Now we have a new DLC that, as usual, is available for sale in the Crown Store of the game and free of charge for subscribers of the game’s premium service, ESO Plus. In this case we find Dragon Bones, a content pack that brings us two new dungeons with their own enemies, bosses, environments and, of course, rewards. Thanks to Bethesda, we have already enjoyed this content and today we bring you 5 reasons to fall in love with Dragon Bones and its dungeons.

The content policy of ZeniMax Online seems to continue to give great results and Dragon Bones does not move away from it. The study behind The Elder Scrolls Online has been betting on packs that, without adding too much content, arrive very regularly (every two or three months). None of these packs is necessary or exclusive so each user can freely choose which one he acquires without worrying about being separated from the rest of the community.

Dragon Bones repeats this strategy and is clearly focused on players who want new challenges regardless of their level. The two new dungeons arrive with adjustments that, as explained by the content developers, will allow all users to enjoy a real challenge.

2 A touch of nostalgia

From ZeniMax Online have repeatedly shown the love they have for the saga The Elder Scrolls and that shows in different details. If a few months ago we were thrilled with our return to Vvardenfell with the great expansion of Morrowind, Dragon Bones takes us back to The Elder Scrolls Arena, to the origins of one of the best-known role-playing sagas.

While the size of the content is not comparable, the story behind Fang Lair, one of the two new dungeons, is exactly that of Arena. And, as you already know, the storytelling of this work is not limited to putting us cinematic, but it is done in a more subtle way, including various visual elements that allow you to catch references to the most long-lived fans.

That the design of The Elder Scrolls Online is a wonder is no secret and, therefore, does not stand out especially in Dragon Bones, because we are badly used. But, again, this content pack is an exhibition in this area. ZeniMax Online has returned to give a twist to the dungeons including various mechanics that are presented briefly, then, be exploited in the fights against the bosses.

Regarding these bosses, we find very inspired designs and ideas that have taken exceptionally good practice. All these new enemies are impressive at the visual level and fresh at the playable level, proposing different challenges that force the group to work together to overcome them. This, together with the different levels of difficulty that we can select, makes Dragon Bones an expansion for all those who want to enjoy new dungeons.

From the moment of its launch, The Elder Scrolls Online has evolved a lot, and that is something that the people responsible for the work do not hide. But the most incredible thing is that the MMO has not evolved only at the level of playability and design, but also in the technical section. The Clockwork City expansion came a few months ago, including significant improvements in the performance of the work in its console versions and less powerful PCs.

Now, with Dragon Bones, no important news arrive but we do have some very interesting details. The different parts of Fang Lair, the dungeon that we have been able to play, are no longer separated by loading screens. Now, when we touch a door to open it, it simply opens and, without loading screens, we just walk through it realistically. We do not notice this change of zone and, although it is a silly detail, it is a change that is appreciated with respect to the past. Like this, many bugs have been fixed and the performance has also suffered a small improvement.

But the best thing about these expansions is that they never come alone, and this time Dragon Bones comes with Update 17 under his arm. This patch comes free to all users and brings news for everyone. Among the highlights is a new system of rewards for leveling up, storage in homes and, above all, the Skills Advisor so that users with less experience in the work can quickly and clearly understand the progression system, taking clear from the first moment what to improve to build a concrete build.

Another of the important novelties that the fans had been asking for some time is the new outfit system. With this new inclusion all players can modify the appearance of their equipment without changing their statistics, allowing each character to look uniquely. In the words of those responsible for The Elder Scrolls Online, users have already done